‘Agli Alboretti’ restaurant is located in Dorsoduro district in Rio Terà Foscarini , facing the art galleries of Accademia. It’s situated inside the historical and homonym Hotel. Some of the most famous artists used this place as a meeting point to get together in between the 50’s and 60’s; also Penny Guggenheim herself used to visit the restaurant. Since September  2011 a new management took the honor to maintein and pass down this ancient culinary tradition: Paolo Lazzari is the owner of the ‘Vini da Gigio’ restaurant and he’s famous for his passion for wine and his wine cellar; his son Nicolò Lazzari is the General manager of the ‘Agli Alboretti’ himself; Nicola Agostini is a business man from Padova and also well known for being a truffle and caviar merchant. 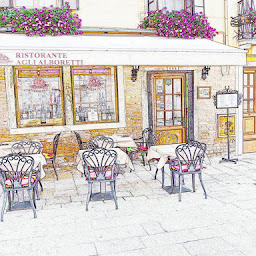 Ani Rak
Verified
Very good food, small selection as it should be in a good restaurant. Nice garden in the backyard. Friendly staff.